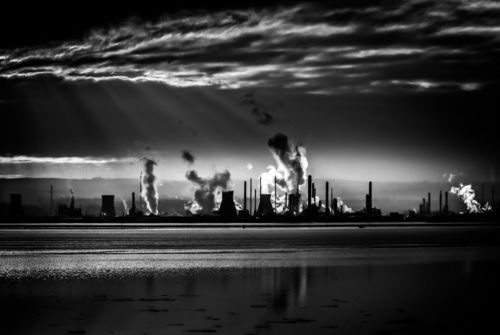 Nigeria is affected by inequality and corruption where the rich get richer and the poor get poorer, there is no breaking through. Climate crises manifest itself in the daily lives of the people. The ecosystem and the people are dying and something needs to be done fast.

Long-term changes in temperature and weather patterns are referred to as climate change, according to the United Nations Climate Action (2022). However, since the 1800s, human activities have been the primary cause of climate change, mainly due to fossil fuels such as coal, oil, and gas.

In recent years, the issue of global climate change has gained much attention, with many in the green movement considering it a catastrophe of unimaginable proportions (O’brien K. et al., 2018). While “green” activists were the ones who initially brought the issue to light, other interest groups are now recognizing the social as well as the ecological ramifications of global warming. According to Bangladeshi activist Nazmul Chowdhury, “forget making poverty history; climate change will make poverty permanent” (Clifford, 2007). Many countries in the Global South are in transitional economies due to climate change leading to an increased need for food and energy and the unpredictable nature of rainfall and catastrophic weather events (IPCC, 2014).

Every part of the world is being impacted by climate change, and according to the Intergovernmental Panel on Climate Change, at least 3.3 billion people are highly vulnerable to its effects (IPCC, 2014). With the most recent decade being the warmest on record, world leaders have agreed that immediate coordinated action is required (BBC News, 2021). According to the 2015 Paris Agreement, nations must adjust to keep global warming “well below” 2°C and strive for 1.5°C to avert a climate disaster. The key objective is to reduce emissions until they reach zero in 2050.

For example, India and Pakistan have been experiencing record-breaking heat waves in the last couple of years, and this has negatively impacted the daily lives of nearly a billion people (Panda, D. K. et al., 2017). Scorching temperatures not only damage wheat harvests but also prevent many labourers from working outdoors and make people vulnerable to serious health issues and, in the worst-case scenario, even death. Another example can be seen in Kenya and Bangladesh. Northern Kenya is facing a prolonged drought that puts rural communities at greater risk of starvation (Opiyo, F., 2015), and torrential rains left one-quarter of Bangladesh under water and destroyed the homes of millions (Ericksen, N. J. et al., 1993).

In the case of Bangladesh, its numerous river deltas and low land are highly vulnerable to the effects of climate change (El-Raey, 1997). Scientists predict that sea levels in Bangladesh’s coastal areas will rise by 0.4 to 1.5 meters by the end of the century, displacing up to 30 million people (Eric Koons, 2022). The sea-level rise will also cause the salinization of agricultural land, rendering these areas uninhabitable and the soil unfit for farming (Islam, 2019). These are just some examples of climate crisis in the Global South.

Climate change is also commonly acknowledged as a “threat multiplier” due to its effects on aggravating the conventional causes of conflict (Zala and Rogers, 2011). The most extreme example is how climatic changes affect competition for scarce resources in several developing countries (Robert Malley, 2020).

In Nigeria, the impact of climate change can be seen in conflicts arising from land degradation and limited resources. There has been displacement of people, hunger, and malnutrition due to water scarcity, drought, desertification, land degradation, and food insecurity. Farmers and herders struggle over the little water left (Hussona J., 2021). This climate crisis has contributed to increasing abductions, killings, and rights violations and to the growth of terrorist organizations causing 10 million people to need humanitarian assistance (Hussona J., 2021). The youths join terrorist groups because of a lack of jobs and challenging economic conditions. Boko Haram is a violent group that recently kidnapped 344 boys in Nigeria, and their reason for such action is that their cattle are being killed when they search for water and trespass into the local’s farmland.

Similarly, with the conflict in Tigray, Ethiopia, over 13 million people are affected by drought, which encourages forced migration and ethnic tensions, and terrorism. Years of drought in the dry Tigray area have wreaked havoc on Ethiopia’s social and environmental system. (Hussona J., 2021). Communities close to the conflict are affected by the violence on a global scale, reflecting the adverse relation of climate change to societal conflicts that can be seen on the African continent (Hussona J., 2021).

Shell is an oil industry in Nigeria that has had devastating effects on the ecosystem and the life of the people. The Federal Government gets 80% of the royalties and mining rents, and only 20% goes to each state government, but the local people get no benefits from the immense wealth generated (Ejobowah, J. B., 2000).

People in the Niger Delta live in darkness while billions of dollars’ worth of oil and energy are being extracted from their land and exported to rich countries in the Global North (Watts, M., 2009). Even though oil drilling causes climate change, these oil companies do not care about the climate and the people but their profits. They leave behind trails of entrenched poverty, pollution, destruction, and human rights abuses.

A Sierra Club20 in 1993 found poorly maintained and leaky pipelines, polluted water, fountains of emulsified oil pouring into villagers’ fields, blowouts, and significant levels of air pollution (Okeagu, J. E. et al., 2006). Farms and water bodies are polluted, and the mangrove swamps, which provide people with buildings and other materials and are a vital part of the ecosystem, are disappearing. At the same time, pollution caused by the oil and natural gas industry has also led to groundwater pollution, leading to outbreaks of diarrhoea and typhoid epidemics. Also, the cases of birth deformities are on the rise, as are certain soft tissue cancers (Okeagu, J. E., 2006). Oil spills and gas flares have decimated fish stocks, and soil fertility has been ruined (Okeagu, J. E. et al., 2006). People are suffering in the Niger Delta, Nigeria, which is dehumanizing (Okeagu, J. E. et al., 2006).

As a result of gas flaring-related environmental pollution, there has been strifes, demonstrations, and sometimes violent protest between the oil exploration companies and habitants of Niger-Delta, Nigeria (Okeagu, J. E.et.al., 2006). The rural farmers and fishers in Nigeria have the phrase “oil is a curse,” and communities in the Niger Delta know this first-hand, mainly due to the devastating impacts of the climate crisis (Okeagu, J. E. et al., 2006). Environmental pollution has also led to the displacement of farmers and their families into surrounding urban centres, which are already ill-equipped to deal with the economic, social, and health requirements of their burgeoning populations (Okeagu, J. E. et al., 2006). Most of the new migrants in these urban centres become trapped in cycles of poverty and penury.

I wholeheartedly concur with the statement that “climate change is a threat multiplier,” as evidenced by its role in intensifying the traditional causes of war and armed conflict in Nigeria and other African nations. The effects of climate change on the economies and people of the Global South can be seen in their diminished rights to a joyful and fear-free existence.

To give a personal anecdote, I come from a generation of fishers from the Niger Delta, Nigeria, Rivers State, to be precise. I was trapped in the Adoni & Ogoni war at four years old and saw what no child should see because of the conflicts relating to waterways and fishing spots. Additionally, I was robbed of a mother because of the adverse effect of oil exploitation by Shell and other oil companies. My mother died of typhoid, and my father never remarried, so I grew up raising myself because my father was hardly around because of his job. This is my story.

Global communities need to immediately step-up climate action. Notably, the rich countries in North America and Europe need to help vulnerable countries weather climate impacts because they have the power, wealth, and education to combat climate change. Most developing countries have a negligible contribution to climate change, but they are willing to fight climate change and need the support of the Global North.

With their ambitious plans and broken promises, the Global North countries not only create but also exacerbate the energy crisis in poorer countries while neglecting the burden it places on them. Global South countries, particularly Africa and South Asia, will bear the brunt of climate consequences. This is a perfect example of climate injustice, as these countries are suffering disproportionately in comparison to their rate of greenhouse gas emissions. As a result, the population’s rights in Global South countries are being eroded. Until the Global North respects and honours the human rights of the developing world, only then shall the effect of climate change be mitigated justly without putting any part of the world at a disadvantage. Although the Global South is the focus of this article, everyone is at risk due to the type and magnitude of the climatic issue.

is a Kiel University student pursuing a master’s degree in Sustainability, society and Environment, writer, and climate activist that fights for gender quality, child abuse, and climate crisis. She volunteers, teaches, and holds workshops on climate-related issues and she is part of the Kogruppe Klimakrise und Menschenrechte Amnesty International Germany.

BBC (2021). COP26: What African climate experts want you to know? Retrieved from https://www.bbc.com/news/topics/cgdwpywgeegt on 12th November 2021

UN (2022). The impacts of climate change on the human rights of people in vulnerable situations – Report of the Secretary-general (A/HRC/50/57) [En/AR/Ru/Zh]. ReliefWeb. https://reliefweb.int/report/world/impacts-climate-change-human-rights-people-vulnerable-situations-report-secretary-general-ahrc5057-enarruzh

The Significance of the Climate Crisis on the Global South
(https://amnesty-klimakrise.de/?p=1470)